America’s Shortage of Truckers in 2020-Has Anything Changed?

The shortage of truckers is perhaps the biggest problem the U.S. trucking industry faces in 2020.

It is considered an even bigger problem than the pandemic itself. The pandemic only compounded the problem when grocery shoppers swarmed the stores when the lockdown was announced.

The demand for truckers immediately jumped, and the shutdown resulted in zero new drivers behind the wheels. Therefore, huge chains had to close a few hours earlier than usual to manage to restock their shelves.

What Is the Truck Driver Shortage?

Before the COVID pandemic, the ATA (American Trucker Association) stated a nationwide shortage of 60,000 truck drivers.

The latest statistics are defeating, showing that only one comes to take their place for every eight truckers who retire. The average trucker age, according to the Bureau of Labor Statistics, is 55 years old. There is a huge challenge to replace retiring drivers with recruits.

Why is this the case? Why is the interest in becoming a truck driver so low?

There are many obstacles for new drivers to get into the career. Here are just some of them:

Current regulation dictates that a driver has to be 21 to drive interstate. This would be great if it were not because the entry-level trucking jobs are exclusively interstate (like OTR)

The three-year gap between high school graduation and being able to drive interstate contributes to graduates looking for alternatives to start earning.

Massive Gap Between the Percentage of Male and Female Drivers

Only 6,7 percent of truckers are women. Although many companies are focusing on increasing this number, it is still far from what it should be.

Many factors contribute to women not being interested in trucking. However, recent technology advances, and the right incentives, may rectify the gender workforce percentage imbalance in trucking. For comparison, the percentage of women workforce in the U.S. is as much as 50.04% as of January 2020.

Nobody Does Weekly Pay

CPM (or cost-per-mile) is the staple of trucking, and it is far from ideal. In theory, it should result in a consistent paycheck, but it is far from real in practice. It is rare for a trucker not to load/unload cargo, mostly paid on a fixed price. However, the time to load or unload varies, and most of the time, the driver would have made more money if they were driving instead of managing cargo.

A guaranteed minimum weekly pay can change this, as it will add another layer of security for the truckers’ salary.

Veterans and Felons Are Not Leveraged as They Should Be

The gritty reality is that there are a lot of veterans and felons who are unemployed. However, carriers do all but offer employment for them. Yes, it is apparent that some of these people are not fit for trucking, but that’s not the majority of the pool.

Veterans are people with impeccable discipline, and felons are people who would give everything for a second chance. With the right approach, this can result in perhaps the most dedicated workers.

How The Pandemic Impacted the Shortage of Truck Drivers?

The COVID-19 pandemic only made things worse for the industry. The shutdown in April included the DMV (Department of Motor Vehicles) in 27 states. CDL schools were also shut down.

With the two pillars of getting new drivers behind the wheel gone indefinitely, the industry getting fresh recruits has been put on a halt. Most DMVs and trucking schools were shut down until recently – and this has had a significant impact on an already struggling industry. Even though the shutdown had to happen, trucks had to keep rolling to deliver essential and non-essential goods across the country.

Remember the old saying, “if you are wearing it, cleaning with it, eating it, drinking it, driving it, or sleeping on it, thank a trucker for bringing it”?

Trucking is one of the pillars of the U.S. economy. Having a shortage of truckers equals fewer drivers to cover haul demands. This, in turn, increases prices on everything truckers deliver.

And truckers deliver 70 percent of all goods that are moved in the U.S.

If there is anything to take out from this post, it is the following:

Trucking is an industry the country can not afford to stagnate. It is vital for the stability of both the economy and the security of everyday life.

If the trend continues in the following decade, it will reach with a shortage of truckers in the millions. When this happens, the whole economy will collapse.

The COVID-19 pandemic has only accelerated the shortage, and DMVs and authorities must make significant changes to keep trucking, and with it, the whole country afloat.

Truck Driving Dangers – The Most Dangerous Job in the U.S. 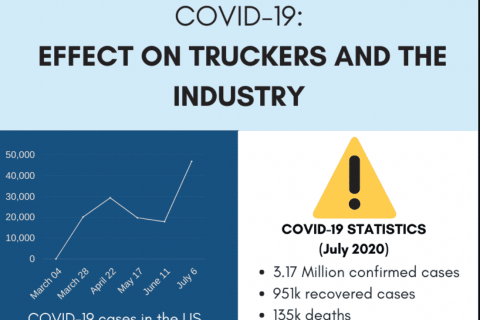 COVID-19: Effect on Truckers and the Industry – Infographic