SAN ANTONIO, TX – A Texas man was charged with capital murder in the latest development of the Tuesday truck stop shootings near I-35 in which a 33-year-old woman and a 45-year-old man were found dead with gunshot wounds.

New Braunfels Police Department’s official statement is that they believe the incident started when Martinez shot and killed the 33-year-old Marisol Martinez around 3 a.m. This incident took place near a Walmart Distribution Center located near I-35.

Sacramento and Marisol were in a relationship in the past, police confirms. Marisol has had a protective order issued against Sacramento due to an incident in March 2019. Allegedly, during the 2019 incident, Martinez tried to strangle Marisol.

After allegedly shooting and killing Marisol Martinez, Sacramento Martinez left the body in a black Ford Expedition parked on northbound I-35. Then, he proceeded to cross I-35 on foot to a TA truck stop located on the other side of the interstate.

At the TA truck stop, Sacramento Martinez allegedly shot and killed the 45-year-old Daniel Sieger, a truck driver, and fled the truck stop by taking the truck with Sieger’s body still inside the cab.

Multiple eyewitnesses spotted the truck driving erratically on I-35. In reports for local KSAT, the truck was driving all over the highway, with several near-misses. Then, Martinez hit a FedEx truck broadside and fled the scene. A woman eyewitness followed the truck, which ran two red lights and rolled over after hitting the FedEx semi.

Soon after the truck rolled over, Martinez was found running from the scene and was arrested and taken to the Bexar County Jail.

Martinez’s arrest was not related to the Tuesday incident. The arrest initially was on a warrant related to the 2019 incident in which Sacramento Martinez tried to strangle Marisol Martinez. Later, he was charged with capital murder, with more charges possibly pending.

“In Texas, a charge of Capital Murder can be made when more than one person is killed during the course of a criminal episode, or if a person commits homicide while also committing another felony,” was in the official New Braunfels Police Department statement.

In Texas, capital murder punishment is either a life sentence without the right for parole or the death penalty by lethal injection. 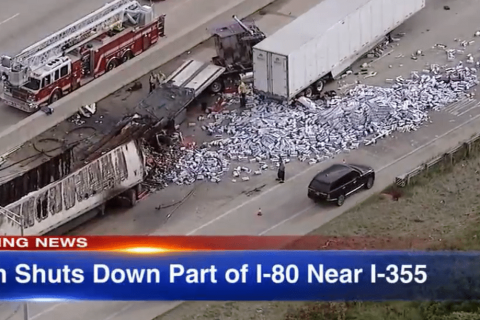 Trucker Dies After Causing a Fiery Chain Crash on I-80

Cow Causes Chain Crash on I-30, One Trucker Dead