VIRGINIA BEACH, VA – The search for the trucker that plunged into the Chesapeake Bay has been called off Tuesday evening, Dec. 29, Coast Guard officials say.

The box truck crashed at around 8:20 a.m. on the east side of the Chesapeake Bay bridge’s northbound lanes. The driver was driving a truck for Cloverland Greenspring Dairy, a company based in Baltimore. The truck went over the guard rail on the bridge and plunged into the bay near Mile Marker 14.

Upon arriving at the scene, emergency response teams found the truck floating in the water.

Witnesses of the crash saw a man get out of the truck and drift westward in the water. It remains unclear whether the diver climbed off or fell out of the cab.

Coast Guard, alongside the fire department, police forces, and emergency medical services started a joint search for the driver. The search began around 8:30 a.m. The joint effort searched for approximately 178 square miles with multiple crews to find the trucker.

Tuesday evening, the search has been suspended.

We would like to extend our condolences to the family and friends of this individual during this time of tragedy,” said the commander of Coast Guard Sector Virginia, Capt. Samson Stevens. “We would like to thank the local first responder agencies for their partnership and dedication in coordinating efforts and searching throughout the day with our crews.”

The trucker has been identified as 47-years-old Erik Mezick of Fruitland, Maryland. 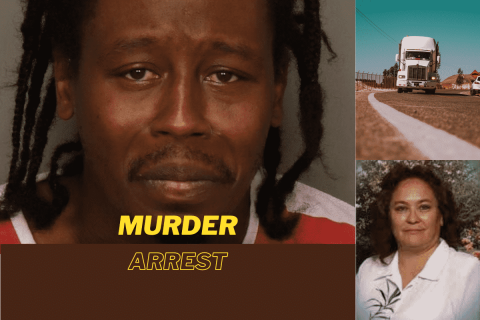 Lady Trucker Murder Suspect: Trump Made Me Do It